CRPS From An Outside Perspective – Interview With a Husband 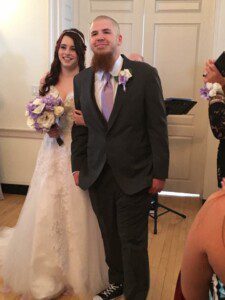 After several requests for my husband and I to give a bit of our story and let everyone know how things work with us, I decided to interview him to find out what he thinks about CRPS/RSD as a person that lives with it daily without physically experiencing it.

10 years ago, I started dating my now husband. We were each 14 years old. This was less than a year after my CRPS/RSD diagnosis. As a matter of fact, I was still on crutches when I started dating the boy with the blue mohawk. At that point, I didn’t know the extent that CRPS/RSD would actually impact my life. I know the doctors told me I’d never walk again, but my physical therapist was determined to get me there. Now that he’s stuck with me for all of eternity (or so I tell him every day), I figured I’d ask a few questions about what it was like learning about all of this CRPS nonsense as I did, while being able to add my own commentary. We have received a lot of requests for advice or for a story on how we “make this work,” so here we go. with CRPS from an outside perspective [Note: This article is not meant to say that it is more difficult to love someone with CRPS, or to say we are not as worthy of love. It is to simply get the mindset and thought process of a significant other as they see all of this [happening to a loved one].

Samantha: Okay, so you knew I was at least some form of injured when we started dating Do you remember me telling you about RSD (now CRPS) at any point of the beginning of our relationship?

Aaron: Yeah, I think so. I kind of had no choice, I’m pretty sure you had crutches at that point. But I don’t remember you specifically saying “Oh, I have RSD.”

S: I didn’t talk too much about CRPS/RSD then because I was too preoccupied with trying to figure out what dating was. Ha! Do you think I have changed in any way now that I openly discuss the diagnosis?

A:  I mean, yeah probably. With me, you realized I wasn’t going anywhere after you told me. You’re much calmer when you explain it to people now, although I’m sure you’re sick of the question. [Sammie’s note: I’m never sick of the question. I’d rather educate people than let them make assumptions] Back then, you didn’t know much about it and would get overwhelmed. Now, you just answer peoples’ questions and try to educate them.

S: I remember a few years into us dating, when my CRPS started to spread, you looked everything up with your sister to try to learn more. What do you remember about that?

A: I remember being on the RSDSA site. To be honest, it scared me. I was thinking everything would just be a mess forever and that the actual flare would last forever. That was overwhelming. But I wanted to know what I could do to help, even though there wasn’t anything specifically I could do other than support you. My sister was equally as overwhelmed. Seeing that it could last the rest of your life was scary to teenage me. [Sammie’s Note: I have gotten to manageable levels of pain, however I do get significant pain flares that set me back. Ones that I didn’t even anticipate as a teenager].

S: Through this entire process, what has been the most difficult part of dating me?

A:  Seeing you hurt or sad is probably the worst, knowing there isn’t much I can do at all. I can deal with everything else, as long as I have you. There isn’t anything that we can’t get through.

S: What has being with a physically disabled person taught you more about the world or about disabilities as a whole?

A:  People can be scummy. They don’t have respect for others. It gets really annoying when people just don’t care when we go out when you’re flaring and they step in front of your wheelchair or try to move you. It makes my blood boil. Don’t get me wrong, there are people with good intentions, but the bad sticks out so much more. You don’t tend to notice the good ones. You remember the people that let the door close, let the elevator go, shoved into the wheelchair, and things like that. [Sammie’s Note: The video clip below, from the TV show “Speechless,” is something that happened to me in a Yankee Candle one day].

S: What is something that you do to handle the stress and pressure that I put on you? How do you unwind so you don’t breakdown?

A: Usually video games. That takes me to another world. But, I found my purpose in life. My goal in life is to make your life better. Whatever I can do to help you is my end goal and makes me feel better. I’m not “dealing” with it, it’s called love. Knowing I’m even just making you smile for a moment is enough, truly. But everyone needs an out. A healthy out. That’s why I play video games. And that’s why I go fishing. Even if you don’t believe when I caught a huge fish.

S: Haha. I always believe you. What have you found the scariest part of CRPS to be?

A: Complete lack of control. Like, yeah some of the medicines help you not flare up, but if you stub your toe, who knows if you’ll be able to walk for the next month. [Sammie Note: So, I know I’m pretty fragile and I forget that, plus my toe is a magnet for wall corners, sorry Aaron!]

S: Based on what you’ve seen from me, how would you describe CRPS now?

A: I usually just explain it as a nerve condition. I could be wrong, but I say imagine if you broke your arm and your body reacts to that like there’s a problem. But with RSD, it just does that even though there isn’t necessarily a real issue. Your body is treating you like you’re broken and it causes your brain receptors to think there’s pain. It’s all overreacting. It’s like an allergy to pain, but neurological.

S: What would you say to all of the significant others of people with CRPS out there?

A: If you love someone, you should be willing to do whatever you can. Even when there’s nothing you can do, you should try to make them smile. However, if you can’t stand the heat, get out of the kitchen. Don’t leave someone hanging on for your own selfish reasons, just to leave them high and dry. Trust me, their heat is much worse than the heat in your kitchen.

What I learned from having this discussion with my husband is that he’s in this as much as I am. I understand why he tries to play defense when we’re out in public and someone gets too close to my left side. I understand why he panics when I faint and fall. While he doesn’t experience the physical pain, he experiences a lot of the emotional pain, especially since he is so eager to help. One thing that we’ve had to really focus on is that he cannot compare his pain to my pain. Sometimes, he doesn’t speak up when he’s in pain because he feels as though it is nothing compared to what I live with. But pain is relative to each individual. He’s allowed to be in pain and not face judgment for saying he is. To answer the question about finding a significant other that fights instead of flies, I’d just say that you have to dive into it. Date people, but be open with them. If they run on the first date, they weren’t worth your time. There are some fantastic men and women out there that are willing to join your team. Anyone that does not want to stick it out misses out on how fantastic you are.

How CRPS Is A Family Disease

Posted On April 3, 2018 ~ 1 Comment
By Samantha Anderson Sometimes, we get so wrapped up in our pain and our diagnosis that we do not realize that CRPS goes beyond us.…

Posted On December 5, 2017 ~ 3 Comments
By Guest Blogger Melissa Wardlaw As a patient with CRPS/RSD, I am lucky to have a pain-management physician I have been partnered with since 2004…

The Top 10 Shoe Brands for CRPS From a CRPS Perspective

Posted On October 10, 2017 ~ 9 Comments
Written by Guest Blogger Ashley Epping I developed CRPS at 12 years old in my left wrist. After being diagnosed, I spent the next six…