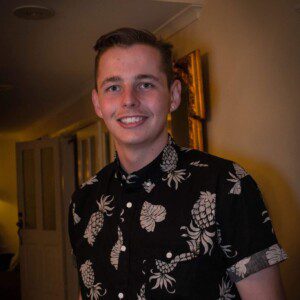 By Matthew for the RSDSA blog.

When a person is diagnosed with CRPS, often times it can be a confusing, complex time. Read what Matthew has gained from his diagnosis and what he hopes for your future.

My name is Matthew. I’m a 19-year-old male from Melbourne, Australia.  I was just recently diagnosed with stage 3 Complex Regional Pain Syndrome, but to most people’s surprise, it was an absolute relief. My injury started 5 years ago as a 14-year-old kid playing basketball. I clashed knees with an opposing player, which I had done hundreds of times before- everyone in sport has. All the usual symptoms of that type of injury came on and lasted weeks: swelling, bruising, dull ache, and redness. 4 months later, after not healing, I saw a sports doctor who sent me to get an MRI. The MRI revealed the conclusion of bone bruising. I was prescribed an anti-inflammatory medication and to see a physio[therapist]. After many months of continuously increasing pain and dozens of specialists telling me that the pain was “in my head,” I went to see my amazing general practitioner and asked to be referred to a reputable orthopedic surgeon.

Several weeks later, I saw the surgeon. The surgeon studied my latest MRI and told me that I had cracked articular cartilage and that I needed surgery sooner rather than later. I took his word for and got with it. He also gave me a cortisone injection to try and settle the pain down before the operation, which did nothing but make my pain worse! The surgery date eventually came and went as planned. Post-surgery, the surgeon told me that I had the worst articular cartilage he’d seen and it may never heal. Time goes by; 3 months, then 6 months. The pain only continued to worsen. I had been back seen the surgeon several times. He did several more cortisone injections. I also had experimental PRP injections, known as plasma rich platelets. Yup, you guessed it- all his attempts to settle the pain just aggravated it more.

By this time, I reached 17-years-old and decided I did not think it was ever going to go away, so I went back to trade school in constant, agonizing pain. I put on my happy face and continued on. Another 18 months went by. By this point, I couldn’t function, hadn’t been to school in a year, and finally decided I needed to see another surgeon or something. I went back to my same general practitioner, who actually told me he believed I had CRPS due to my symptoms. After further discussion, he sent me off to a world renowned knee surgeon for confirmation of diagnosis. He confirmed it and I was referred to the pain management specialist clinic at Epworth to see a CRPS expert. I couldn’t have been happier. Of course, I have a long, long way to go, but finally I can see light at the end of the tunnel! Finally, someone believes me. It’s not in my head! I have had two appointments with my pain specialist. He’s amazing. We tried a couple of medications with not much luck. I think we are going to try a sympathetic block next, fingers crossed!

I had times during the past 5 years, as a young fella, that I hoped I wouldn’t wake up because of the excruciating pain I live in. CRPS is terrible at the best of times, let alone being young and at school, having mates and teachers that don’t believe you. I never thought I’d get a diagnosis or anyone to believe that I’m in real, physical pain. But it happened, it happened for me so it can happen for you, too. I know I’m not out of the woods yet, not by a long shot, but I’m on the right path. I’m in the right direction! I’m more than satisfied with my new pain management specialists, so I have faith we’ll be able to get it somewhat under control. I hope I can return to my life. We all know what CRPS can take away from you. I’ve heard it compared to bleeding out slowly from a gunshot wound, and in many ways that is true. While you’re not physically dying, it slowly, but surely takes away your will to live and enjoy life. Coming from a young man, that’s a huge dramatic statement. Anyone that has been through this will understand. On the flip side, my will to live and enjoy life is only growing by the day. Every time I read another story of hope, I gain a little more faith that I will get better.

I’ve already talked about all the down sides of CRPS and it’d be perfectly understandable to think: “How would anyone be able to find a positive out of such a gloomy situation?” Well, my friends, CRPS has given me appreciation for life; the fresh air I breathe, the birds singing in the morning, it makes you think about all the people in the world not appreciating their lives. Most importantly it gave me perspective. The perspective that makes me happy to be alive each day, be able to breathe fresh air, even eat a sweet juicy apple. It’s the kind of perspective that makes you not worry about anything that isn’t worth worrying about. Every second you spend arguing/yelling/getting involved in drama is a second less you’ll get to do what you want with the days that God has allocated you. This is my story. I really hope it gives someone, even one person, some hope that one day they can get on the right path and head towards a happy pain free life.

Posted On November 3, 2017 ~ 0 Comments
Written by Guest Blogger Melissa Lovitz. Melissa initially featured this post on her blog. The Washington Post recently published an article about CRPS titled “The…

My Journey Is Not a Story of a Spontaneous Miracle

Posted On December 7, 2021 ~ 1 Comment
Written by Tamara Gurin. My CRPS story began, like many CRPS stories, with misdiagnosis and despair over my rapidly worsening condition. Abnormal electromyography (EMG) test…

Posted On May 23, 2017 ~ 0 Comments
Written by Guest Blogger Gabe King Guest blogger Gabe returns this week. After his blog entitled "A Thorn in the Flesh" was well-received, he returns…