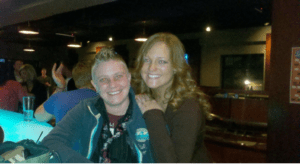 Written by Guest Blogger Stephanie Umlor for the RSDSA blog.

While we live with CRPS daily and can let it take over our thoughts, we often don’t realize how our loved ones are affected. This is a reminder that every caregiver and loved one can be affected by this CRPS “monster” as well.

A reality of anger, hurt, and pain rages havoc on our bodies and minds CRPS is a methodical monster. Convincing us that we are helpless, worthless, a burden, as well as unable to to love someone the same way as we did before. Leaving us in an atmosphere so overwhelming we might as well stay. I call this “ CRPS Pain Limbo;” I know most medical professionals refer to it as “ The 5 Stages of Grief.” I think with CRPS sufferers we tend to stay in the anger and bargaining stage more than any other one that’s why I call it CRPS pain limbo.

What happens if one day you stop and wonder if maybe my spouse may feel the same as I do? Impossible right? Not at all, CRPS may not impact the ones we love with constant pain or fatigue but it does impact them psychologically. They feel Helpless, Worthless, maybe as a burden, and they feel isolated or alone which are a lot of the same feelings we feel. I realized this year from a situation due to CRPS how my wife (Valarie) was feeling as devastated as I had been through the last 7 years. I have accepted that CRPS is a part of me and the perception I believed was reality became an obstacle I had to go through to be where I am now.

Reality is a hard pill to swallow and I had my dose from Vascular test results that were given to me June of this year. When the Vascular specialist came into the room to talk to me I figured he would be like the rest of every doctor, I will admit it he wasn’t. When he first started talking he sounded like Charlie Brown’s teacher speaking, then it started to make sense he was telling me I have bilateral Peripheral Artery Disease(PAD)! He continued by telling me that it was completely neurological and there was nothing he could do, but then he said,” This is CRPS at it’s finest! I mean This is what CRPS can do in its truest form.” I know most people probably took that as a crude statement, when I told Valarie she did but I didn’t. He explained that he had extreme concerns about possible wounds that could develop on my feet and not heal which would or could cause an amputation. I let it sink in and then said, “ So I could possibly lose a toe or my foot, that’s what you’re saying?” The look on his face was unforgettable along with the words that followed that look, “ That would not be the case in your situation! Due to the constriction in your legs the amputation would happen either right below the knee or above it.” My heart sank and continued sinking as I was heading back to my car. I got into my car thinking I was going to throw but the end result was me bursting into tears and a quick phone call to my wife.

When Valarie got home from work, I met her at the back door; her eyes along with the way she wrapped her arms around explained everything I have ever thought or wondered. Still to this day I have no idea why or how the so called CRPS pain limbo melted away to let me see how she was feeling through all of this. For many years I never could understand why my wife was so quiet about certain aspects of CRPS, then becoming frustrated. I imagined it was because I wasn’t who I use to be physically and I was just a burden in her life now, how wrong I was! In that split moment of that hug all of those times flipped through my mind like a photo album and then I said, “ I understand now and I am sorry.” I went on to explain that during the years I never contemplated how she was handling everything. She told me she, too, felt helpless not being able to take the pain away, she felt worthless because I always refused her help, she never wanted to say was in pain due to how could it even compare to what I feel on a daily basis, and she felt alone because she wanted to understand how I felt but I just wouldn’t let her in.

Like I said earlier reality is a hard pill to swallow and CRPS is an intelligent monster causing catastrophic effects to the ones we love and the ones suffering from painful sensations. I would definitely go through it all again to be able to feel the calming relief I felt that day and continue to feel. Learning that communication, involving the people closest to you, and realizing my wife may not be able to fully understand my pain but she can relate to the emotions endured with CRPS has created a very stress free life.I feel strongly that if a CRPS sufferer feels alone and misunderstood their spouse, partner, or girlfriend/boyfriend [or other caregiver] probably feels the same way. So, please try to communicate with them because they are our biggest cheerleaders .

Posted On March 13, 2018 ~ 0 Comments
By Guest Blogger Gabe King "You come out of suffering sometimes scarred. But you come out, anyway, a stronger person...you become, yourself, a wounded healer."…

Posted On October 7, 2015 ~ 0 Comments
Written by Elizabeth Lane for the RSDSA blog. Ok maybe eight. I’m adding one. It’s FREE. I should say that usually you must pay to…

Seeing Is Not Always Believing: Perception and Chronic Pain

Posted On February 27, 2018 ~ 0 Comments
By Guest Blogger Gabe King This blog was originally titled "Seeing Is Not Always Believing: How Chronic Pain Warriors Allow Others' Perception To Shape Them."…