Shelter Me From The Rain

Written by Erica Santiago. Reposted with permission for the RSDSA blog.

Back in November 2012, I was on my way to a doctors appointment out in Boston Massachusetts. I was hit on the left side of my car by a very large tractor trailer truck during a merge in the road. I did not know at the time that this accident was going to be the changing point in my life.

The condition I developed from this accident made everything different and quickly, seemingly overnight. My left hand ended up not working correctly five days after the accident. I woke up and felt a very strong weakness in my left hand. I called my neurologist that I see for migraines and he said he wanted to see me right away. I went to see him and he ran some tests, did a CT scan, and an MRI of my arm. He called me to tell me that everything came back normal.

I was losing the ability to function my hand normally. As each day went by, my left hand started closing with severe muscle spasms into a fist. My fingers pulled in downward. I could not open it anymore. I only had a functioning pinky on that hand. Suddenly I was down from ten fingers to six. The photo below shows the position my hand was stuck in. 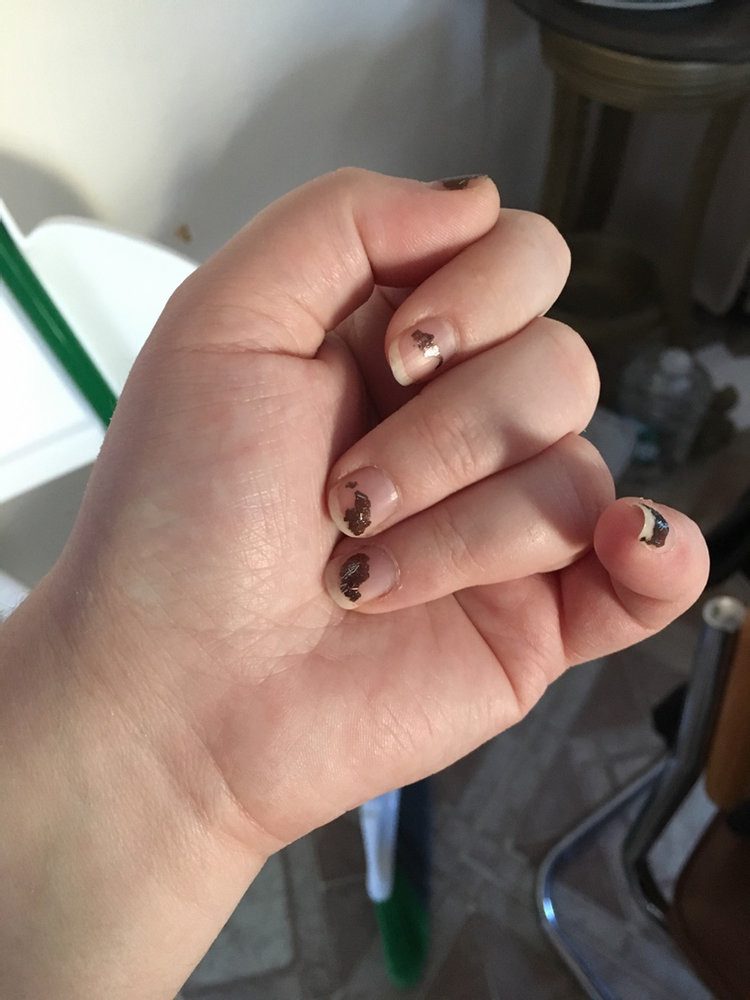 I had to relearn everything: How to open up packages using my mouth, how to button up shirts using my right hand and a pinky on my left hand. I needed to open up straws using my teeth. I was forced to relearn how to modify my life around using six fingers. I would get stares from strangers in McDonald’s and other restaurants. People of all ages just looking at me wondering why I was doing things the way that I was doing them. I tried not to let it bother me, but deep down it did.

My four-year-old daughter was in the car with me when this tractor trailer truck hit my car. Thank goodness she was not hurt, but it was hard taking care of her with this going on. I was in so much pain as the muscle spasms were so tight it was like a strange force overcame my left hand. My fingers were digging into my palm.

Anything touching that arm sent electric shocks down my arm into my left hand. Breezes hurt as the simple wind felt like stabbing sensations. Rain felt like stinging bees on that arm. The cold was like ice picks jabbing me repeatedly. I could not be touched on that arm. I was tortured. This was all day and night, constantly never letting up. So imagine my pain when I broke this exact same wrist in June 2018. My wrist cracked while gardening and I was laying on the ground seeing stars. I got a fancy purple cast and luckily about six months later it healed. 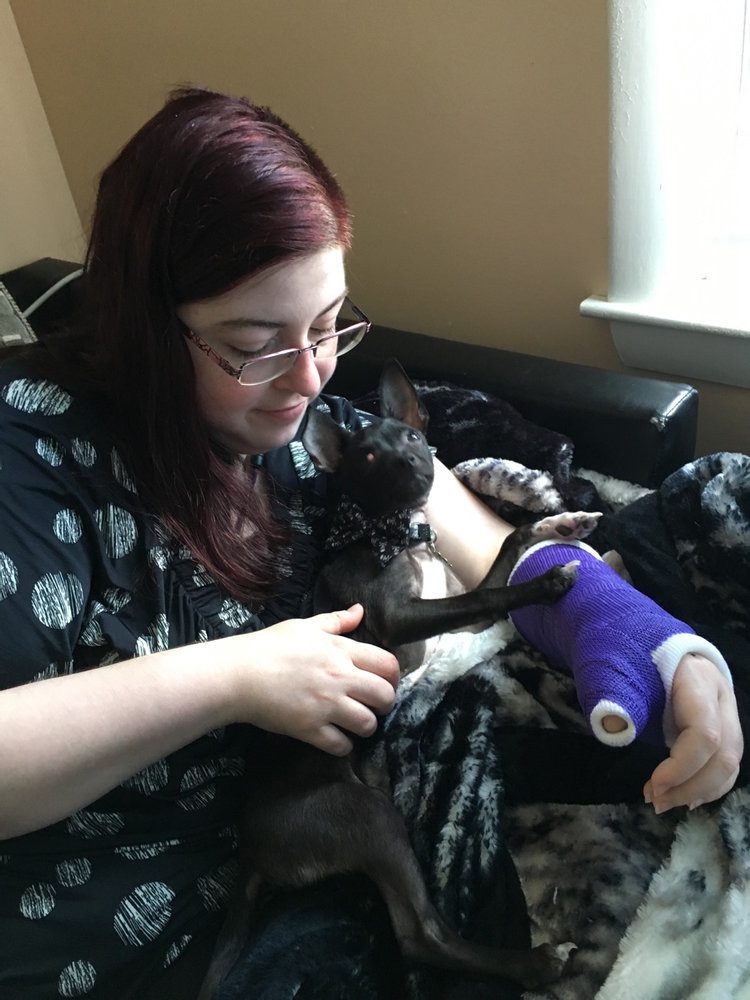 Here I am petting my dog Odin while wearing my cast. He was just a puppy then. He’s three years old now.

In 2013, a year after the accident, my hand was still closed after seeing a few specialists. What was worse is my wrist was now stuck flexed in a bent position towards my body. My left arm and hand became useless and I stayed that way for 3 1/2 years. I somehow made it through everyday with this excruciating pain.

I had seen many doctors and went through many different treatments some of which were very strange. I had a treatment where I had to stick my arm in a machine that was 107° and they were ground up corn husks inside that were blowing around my arm. I had another therapy, mirror box therapy, where I had to put my arm behind a mirror and my good hand in front of it. It is supposed to trick your brain into thinking that your good hand is your bad hand with the idea being that you can try to get some movement in the RSD affected limb.

I had so much physical therapy, years worth. I had about eight different therapists in three different places. I saw over 12 doctors in about a three year time span. It is really hard finding a doctor who even knows what RSD (also known as CRPS) is, never mind knowing how to treat this condition. I just wanted answers and no one was able to give them to me. I was losing hope and feeling immensely frustrated. I did not know where to turn.

It wasn’t until I went to a pain clinic out in Boston. I saw a pain doctor there who knew exactly what I had the moment that he met me.

My arm was purple, ice cold to the touch. It was shiny and it also was extremely tightly stuck in spasms. The muscle spasms I was having he told me was something called Dystonia.

He told me that the condition that I have causing the pain, discoloration and Dystonia is called Reflex Sympathetic Dystrophy. It’s also called Complex Regional Pain Syndrome. I went home and researched it and it scared the heck out of me. I now have this new condition that is completely life altering and I had a young child. I did not know what I was going to do.

Later on in my treatment, it was suggested that I get a major surgery and get an implant device called a spinal cord stimulator. I ended up having that surgery after going through extensive talking in counseling with people and specialists because that surgery does not always work. They put a battery pack into the right part of my back. I had over a 6-inch incision in the back of my neck, to make room for the metal plate. I also had about a 4-inch incision in my upper back.

That surgery ended up helping me for a few years and it did get my hand open. I had to use a remote control to up or lower the amount of electrical stimulation it was giving me. It basically blocks pain signals coming from brain and it confuses them, so it did help me for a few years, but then I started developing complications from that device. An infection after the first surgery was a big complication I had. I ended up having to be admitted in the hospital for five days and on pulse IV antibiotics.

I then also started developing an allergy to the metal of the product and started losing my balance and having very strange neurological symptoms. After all of this and after four years having it implanted, I decided to have my spinal cord stimulator removed. That was probably one of the hardest decisions I have had to make in my life because I knew that by removing this, I might lose my hand forever. I also knew though that if I left it in I might not have any quality of life going forward.

So I had to do what I thought was best. I still suffer with immense pain every day. I am happy to report that my hand is still open. I have kept it open by using it every day. If you do not use your RSD affected limb you can lose the function in it rather quickly. One of the biggest things I have learned is that you have to push through the pain every day, in your own way. Any way that you can do it.

Here is a picture of my left hand shortly after my cast was taken off. My hand is open again. I can’t even describe the joy and relief I felt.

November 2021 will be nine years that I have had RSD. It is still extremely difficult and there are some days that I do not even know how I get through them, but I have great support from my parents. I have great support from my family and my daughter, who is now thirteen, understands a lot more about this condition. She also helps me around the house with the animals and cleaning. I am very blessed that I have such great people in my life that are able to support me in the way that they have.

My book details my journey even further than what I have written here. My book also has a chapter for family and friends to help them learn what they can say or do to help someone affected with RSD. In addition, it has a more medical in-depth explanation of what this condition is.

My book is called “Shelter Me From The Rain” and it is available on Amazon. I hope you do check it out and I hope that by sharing my story I can help others. 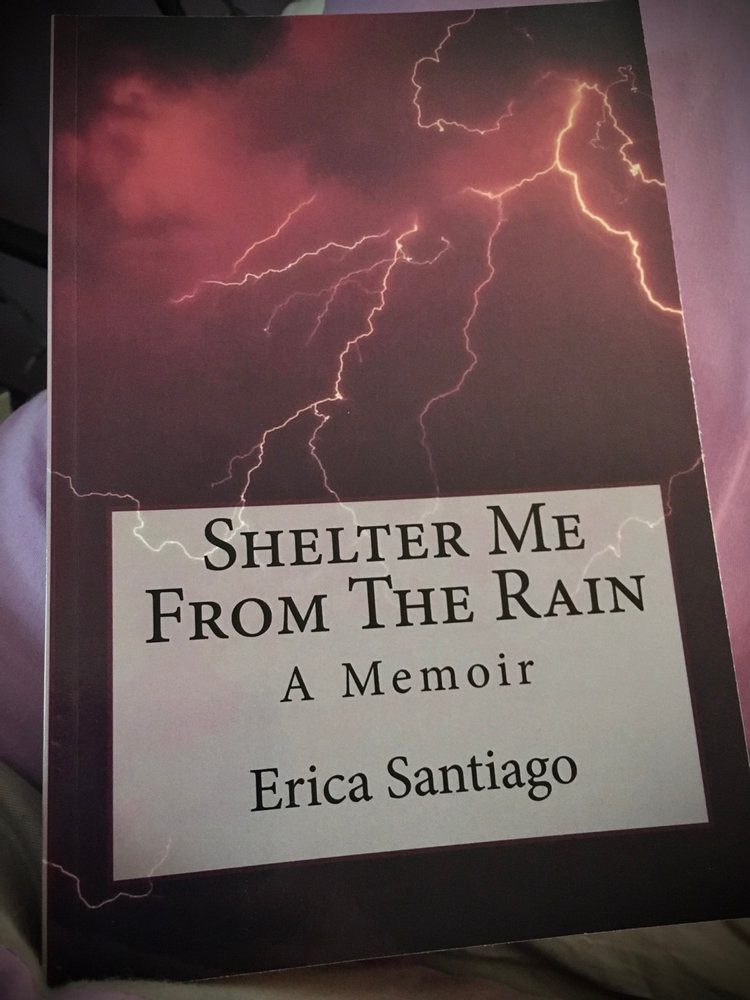 I am in the process of writing a sequel memoir called “Shelter Me From The Pain.” This book follows up from the last half of 2018 and on. That book will also be on Amazon once it is published. If you have any questions, comments or just want to say hi, please feel free to reach out to me at Erica786@yahoo.com.

I may have the world’s most painful condition but I have learned my incredible strength by learning how to live life in a completely different way.

Never give up! You can do this! I have faith in you. In all of us! We are an RSD family and we can always be there for each other. I wish all of you fellow RSD warriors many low pain days to come.

Posted On June 24, 2020 ~ 0 Comments
Written for the RSDSA blog by Maya S. Hi! My name is Maya S. and I am sixteen years old. Shortly before my tenth birthday,…

Posted On March 27, 2019 ~ 0 Comments
Written by Elisa Friedlander for the RSDSA blog. Hello dear readers! This post below is from an article I wrote a few months ago. It…

Ask As Many Questions as Possible. No Question Is a Bad Question.

Posted On July 16, 2021 ~ 7 Comments
Written by Stephen M. Dorian for the RSDSA blog. How and when did you develop CRPS/RSD? I have had CRPS/RSD for over 10 years. My CRPS/RSD…