Stages of Grief With CRPS 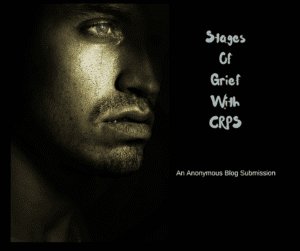 Being diagnosed with CRPS at a young age comes with its own complications. There are so many things to try, so many people with different opinions, and so many different emotions that can be felt. This author wrote about their experience with CRPS, grief, and learning to live with pain.

When I was twenty-four years old, I was working 40 hours a week on my feet as a restaurant manager.  Working this way for three years straight never really bothered me.  It wasn’t until one Friday afternoon when I began feeling an excruciating pain in my lower left leg.  Despite it getting worse as I tried to walk on it, I really didn’t think much of it. I wrote it off as an injury I probably obtained while landing incorrectly jumping off a ladder.  This had occurred a few days prior, so I assumed it was that.  When my boss walked in to work that night she had asked me how everything was going.  I informed her of my pain and difficulty walking but she didn’t seem to care.  After being denied my request to leave work early, I suffered through the pain and made sure that all of management duties were completed.  I was hoping that the following day would be better, but I woke up that Saturday morning with the same pain.  I had no idea that this was something that would be a part of my life forever.

When the pain failed to subside, I thought that it was time to see a doctor.  The first doctor I went to conducted some tests.  Nothing was found in said tests, so I was sent on my way.  Seeking a second opinion, I went to another doctor who seemed determined to get to the bottom of the issue I was having.  Test after test, surgery after surgery, I was starting to lose my mind.  Nothing was working!  Six months and two surgeries later, I still had that same excruciating pain.  The swelling resulting from the surgeries made my pain even worse and all I wanted was for it to go away.

After what seemed like the 100th test, I had multiple doctors examining me.  After exchanging quick glances, they left the room.  Upon their return, they stated that they believe that I have RSD, but they couldn’t be too sure.  They said they would conduct more tests and that I shouldn’t worry my parents until they can confirm this diagnosis.  To my dismay, the doctors were correct.  They eventually confirmed that CRPS had inhabited my lower left leg.

Since being diagnosed, I have suffered through more treatments than most people go through in a lifetime.  I have seen twenty-two doctors, undergone seven sympathetic nerve blocks, had a SCS implantation and revision, went through five days of ketamine infusions, years of physical therapy, a great deal of medication including experimental drugs, acupuncture, AND a DRG trial.   At this point, the condition has spread to pretty much all of my extremities.  As you can tell I try to fight my way through this.

I have gone through a great deal of phases over the past few years.  I started off feeling sorry for myself.  I would tell everyone what was going on and I would share a great deal of negative information on social media.  My posts were all about being sick and getting procedures and tests done.  I guess I wanted everyone to know what I was going through?  I must have been feeling sorry for myself and felt that if I shared the information I would get some added attention.

I went to see a new doctor at one point during the years.  Mind you he is one of the most “recognized” doctors in terms of treating CRPS.  He is the one who gave me the low dose naltrexone which is an experimental medication for the treatment of this condition.  He thought he was the CRPS guru and that his information was like some sort of gold.  During my consultation he told me that I was going to lose all my friends.  He said everyone was going to get sick of me and would eventually stop talking to me.  Definitely not information you want to hear from a doctor.  Thankfully, he is no longer my doctor, but he will forever be remembered and not in a good way.  Luckily, I proved him wrong!

After feeling sorry for myself I would share a great deal of articles I found on social media, thinking I was spreading awareness.  I would send articles to my parents hoping they would understand what I was going through.  I friended a lot of people with CRPS on different social media platforms and I would tell all my friends every little thing I was going through and everything that happened to me along the way.  This phase was certainly not helpful.  It seemed some people thought my attempt at promoting awareness was just me spreading negative energy.  I just wanted to be heard.  I wanted people to know what I was going through.  I found that the majority of people I friended were acting in a similar fashion to me in relation to their posts on social media.  However, these individuals were so depressing that I had to quickly unfriend them all.  People were clearly in a deeper hole than I was and I was just not mentally stable enough to see what they were posting it was way too much negative energy.  At that point felt like my posts could also become tiresome to others.

I have finally reached a phase that I think will stick.  I deleted pretty much everything from my social media accounts that states I have this condition.  I belong to a few Facebook groups that offer helpful information to me but that’s about it.  I go to CRPS walks that are close by and I occasionally write articles for the RSDSA newsletter.  I have a core group of friends who care deeply about me.  These individuals know what I am going through, they have seen me at my worst and they have seen me at my best.  Luckily, it is always a judgement free zone with them.

I have learned to just stay strong throughout the years.  I have learned the importance of my friends and family.  I rarely/never complain about how much pain I am in.  My family and friends know I am going through something incredibly tough.  I don’t really tell any new people I meet that I have one of the most painful conditions in the world.  I still go out with my friends and do things that “normal” people do.  Talking about it is depressing and nobody likes a depressing person.  They will most likely gravitate away from you and having friends is very important for mental health which is INCREDIBLY important in your battle with CRPS.  Your mood may not directly correlate with your pain level, but it is definitely easier to deal with your pain when you are in a better mood.  I don’t know why I developed this disease, but I do know it has made me a lot stronger.  I try my best to stay positive and spread positive energy.

CRPS – Find The Fruit Or Rot Inside

Posted On May 23, 2018 ~ 0 Comments
by Gracie Bagosy-Young This blog was originally posted on The National Pain Report. Click here to see it there. Gracie discusses how CRPS helped her…

CRPS Awareness Day 25: When They Laugh

Posted On November 25, 2017 ~ 0 Comments
By Guest Blogger Sarah Bigham This blog was originally featured on The Idea Crucible (click here) and featured this thank you: "Thanks to Lori Leitzel…