When Treatment Offers Hope For Normalcy 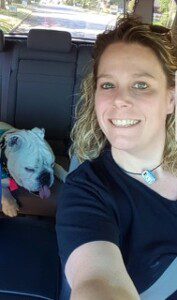 Jamynne discusses a potential co-morbid condition of CRPS- Dysautonomia. How does this impact her life? How did the treatment of CRPS impact this condition? What does she do to make the most of each good moment? Find out what happens when treatment provides hope for a better day, but makes some of your days more complicated.

Yesterday, I was feeling brave. I was feeling invincible. I was feeling like I “could.” And so, I did.  I grabbed the car key, put it in the ignition, put it in “drive,” and went. I just went. I think I drove a good 20 miles. Admittedly, it was tough at times to see the road through my tears, but I did it. I wasn’t alone. I had My Person sitting beside me acting as my co-pilot. But I did it all the same. On my own. Not a big deal, right? Wrong. Here’s why.

For the better part of 2 years, I haven’t been able to drive at all.  And for a year before that, it was limited to sunny days and clear weather. CRPS and Autonomic Dysfunction had robbed me of my ability to see well enough to drive. It’s also taken my ability to read fine print, menus in a restaurant, and even the medium-sized font on this laptop. Over the last few years I’ve consistently had to make the font bigger and bigger, just so I can see it. In restaurants, it’s not unusual to have to ask for help figuring out what I want. Not because I can’t make a decision, but because I can’t read what’s on the menu. I’ve been relegated to the house unless My Person is home for the majority of the past two years. Most days that meant sitting on the couch and listening to the TV. It’s a large screen so I can see most of it, but looking through my eyes and trying to see what I see is often like putting 20 window screens together and trying to look through them clearly.  It’s shady, the colors are dull, and there’s absolutely no clarity in the details.  When I’m having particularly rough days, I can lose my sight all together. Everything goes black. That can last anywhere from 10-15 minutes to several hours. Imagine being home alone when that happens (that’s an estimate because I can’t see my watch, nor can I time it). Then, without rhyme or reason, it’ll improve, though never to the point where I’ve been able to feel comfortable getting behind the wheel of a vehicle. It’s terrifying. That is, until yesterday.

Autonomic dysfunction or dysautonomia is a condition in which the autonomic nervous system does not work properly. It can affect the stomach, bowels, bladder, pupils, sweat glands, cardiac function, and blood vessels. It can cause you to pass out without warning. It affects your ability to regulate your body temperature. It makes you intolerant to weather change. Gastroparesis leads to severe bloating after meals, as well as the ability to keep what you’ve eaten… down or in. It affects the bladder in terms of having the constant urge to “go” even if there’s nothing in there to pass. Your resting heart rate can be fast. My heart rate has been known to get up into the 130’s without exertion, which can be very uncomfortable at times.  Lastly, it can negatively affect your vision- sometimes robbing you of it completely. I live with this every day. It’s a tough disease and it’s very difficult to manage. And like CRPS, there is no cure. The prognosis is difficult to predict as it depends on several different factors within the central nervous system; where it’s progressing, how it’s progressing, what organ systems it’s affecting, etc. Because of so many “unknowns,” autonomic dysfunction can be fatal due to either acute respiratory failure, pneumonia, or sudden cardiac arrest. When I tell people that I feel like each moment is a gift, it is no exaggeration. Treatment is difficult and like CRPS, it’s often like trying to find a needle in a haystack. Because it’s made up of so many different symptoms, the goal is to find various drug therapies to manage them. What I’ve been battling is considered “severe” by my doctors and I’ve recently begun my second round of IVIG plasma infusions in the hope that it can make a difference in my symptoms. This came about, we believe, from the inconsistency of care that I received for my CRPS.  Because I am a worker’s compensation case there was no care rendered, at all, at the beginning of my diagnosis. The CRPS ultimately proved to be systemic and along came the autonomic dysfunction. I received my first IVIG treatment back in 2016 for 5 consecutive days a month. For 9 months. My neurologist hoped that the first thing it would help was my vision. Sadly, that wasn’t the case. While it helped with some of my symptoms, it didn’t ever touch the vision. Two years later, I’ve had one round of 5 consecutive days and while it took tons out of me, the side effects are horrible.I really struggled with even wanting to continue. 3 weeks after the first round this time, I’m driving. I’ve got two more months of 5 day treatments before going back for my reevaluation in July and I know each month is going to be rougher than the last. But I have hope and while it’s not a guarantee of anything, I’ll take it. For now.

Chronic illness, CRPS, autonomic dysfunction, and everything these diseases entail is extraordinarily isolating on its own. If pain levels are high, you don’t go out. If you’ve used up all your spoons for the day (love that Spoon Theory), you know you’re on the couch possibly for the next 2-3 days. You can’t go out with friends.  You can’t meet them for Happy Hour. And in my case, even if I was feeling up to it, I couldn’t go because I couldn’t see well enough to drive. Uber had become my best friend at times, but it’s not the same.  And honestly, if your friends aren’t coming to see you, if they just don’t understand your disease and they don’t see the need to come sit on your couch with you, you’re completely on your own. I’ve always been social.  I’ve always had people to hang out with. Always. Until I got sick. We forget that even when our lives stop, theirs doesn’t. They go on without you and most times, I don’t think they know how hurtful that can be to someone who has been relegated to looking at life through their own rearview mirror. It’s tough stuff. But yesterday, I drove. And I’ve got to say, they were the best 20 miles of my life.

I don’t know how long this period of “clarity” will last. I could wake up tomorrow and be right back where I was last week. But you know what? That’s okay. For this moment in time, I have the choice whether or not to drive my own vehicle. And that’s HUGE.  Before I got sick, I was a 12-handicap golfer. I rode a beautiful Harley. I was a proud paramedic who loved every part of her job. I played softball. I was active in my life and in the lives of others. I traveled. A lot. I lived for experiences. I loved the journey regardless of destination.  My life was full. It was almost complete. That was then. CRPS and autonomic dysfunction has taken a lot from me, but yesterday, with the love, support, and encouragement from My Person, I took a small piece of that back. As we pulled into our driveway she looked at me, smiled, and asked: “So, how did it feel?” I thought about it for a moment, and then I thought some more. I’ll tell you what I told her. Driving is like riding a bike. You never forget how to do it. On the other hand, I feel like a teenager who has just gotten her license. It is a feeling of independence and excitement that I hadn’t felt in a very long time. I don’t know how long this will last. It could all change tomorrow. But if it does, I know I’ve got an amazing co-pilot who will take over if needed. And until then, I’m going to celebrate the hell out of this. One mile at a time. The only rearview mirror I’ll be looking in, is the one attached to my windshield.

I start my second round of IVIG in a few days. I know it will most likely bring me to my knees. But I’m going to keep doing this for as long as I can. The payoff? The set of keys hanging by the front door. They’re a ticket to an independence and a freedom that never meant more to me than right now this very minute.

They say it’s always darkest before the light. No truer words have ever been spoken.

CRPS Awareness Day 26: The Importance of a Walk

Posted On November 26, 2017 ~ 0 Comments
By Guest Blogger Beth Seickel Many of us attend or get involved with a walk to support a family member or friend challenged by a…

CRPS Retreats and Gatherings – The Positive Impact of the YA Retreat

Posted On August 29, 2017 ~ 0 Comments
Written by Guest Blogger Melissa Lanty RSDSA is focusing on how we can better serve the community, especially with November (CRPS Awareness Month) quickly approaching.…