“A Happy Seven” Short Film Review- Relating Back to CRPS 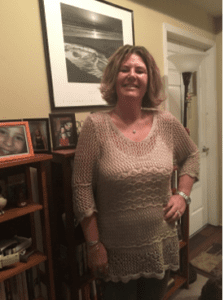 Chronic Pain Blogger, Juli Wordgirl, offers her insight into the short film entitled “A Happy Seven.” How does she think this relates back to the CRPS/RSD community?

Life with Complex Regional Pain Syndrome (CRPS) is very difficult for me. Over the past nine-years I’ve made some difficult decisions, and I’ve had to face the consequences of those decisions—whether they are my fault or not. But in the past two-years (especially the last six-months), I’ve made the decision to be pro-actively more positive in my mind-set. One of the steps I’ve taken in my pro-active path is finding a local chronic pain support group. The following review is based on my post on the support group’s Facebook page, which I wrote immediately following group May 2017. The support group meets twice a month (first Saturday of every month, and last Thursday of every month). The people there are uniquely qualified to offer support because they understand everyday life with constant pain. It’s so refreshing to not have to explain over and over again what’s no difficult about simply opening my eyes and getting out of bed. “A Happy Seven,” the short film we viewed, captures nicely, in video, life with chronic pain.

“Last night at support group, we had a great discussion. The group’s support was awesome. I know I felt better when I left; my physical pain wasn’t gone, but my emotional pain was lessened. The group was blessed with a visual treat of watching a short-film “A Happy Seven.” It’s about a day in the life of a young-woman who has Fibromyalgia. The following is my personal reaction and review of the short film. I encourage everyone to view this film when opportunity arises.

The film opens with a beautiful tree while the young-woman is speaking. Then startling, harsh FEEDBACK sound interrupts and the screen switches to the woman in pain crawling on a carpeted floor. She says, “I don’t want to slow down. I need to get up.” Soon it’s clear the feedback is an indicator for pain: the louder the feedback, the worse the pain

Scene switch to woman and her mother. The mom is overly concerned, looking at her daughter with love. The mother hen-pecks about her daughter’s meds, how her caretaking is going, and what her pain level is–maybe a 5? The woman responds, like we all do, that’s she’s fine and she smiles. But the smile fades into the blank stare of pain as she gazes out the window.

The next scene is the woman and her brother. They look genuinely happy playing together, while the mother looks on with consternation. The young-woman sees the look, lowers her eyes, and seems to feel condemned. Then the brother leaves the room, and the young-woman struggles to stand from the floor. Next, she is lying in bed but not sleeping. Flat on her back, completely still and unmoving, with tears falling from her eyes. FEEDBACK. The phone begins to ring on her headboard. She makes no move to answer the phone.

She is remembering a talk with a friend who is enthusiastically urging the woman to take a long-planned trip. The friend says to just do it, it will be fine, she will go slowly with the woman. The young-woman says, with blatant honesty, that it will never happen, but the friend ignores her and runs up the stairs ahead of her still making plans for a trip that is ripping the heart of the woman.

In the kitchen later, the sister and woman are peeling carrots talking about family when a sudden flare causes the young- woman to scream and fall to the floor. The sister sits with the woman until the flare passes, then asks about the pain level, “Is it an 8?” The woman says it’s more like a 7/10 for her.

The next scene is my favorite, because I hear it all the time. The young-woman is meeting with some “friends.” They call out what they think might be the cause of her pain: “It’s a disorder,” Arthritis,” Psychosomatic,” ” Too much dopamine,” “Get outside more, “It’s not even real, and (my favorite) “You don’t look sick.” The woman’s reaction is a swirl of non-stop thoughts: “You don’t see me, don’t know me, I’m in too deep, a burden, it’s too hard, I’m trying so, so hard, I need to slow down, stop looking at me like that! Just let me feel safe!”

A great illustration of fibro fog comes next, when someone asks a really easy questions of, “How long have you known your friend?” The woman stumbles for an answer, “Umm, umm, ahh, ahh, umm. We met at grade school.” How many of us do the same thing? I do it all the time. Light feedback grows to LOUD FEEDBACK!

FEEDBACK. Now the woman is throwing up. She’s crawling up stairs. She’s trying to start a shower. She climbs in, fully clothed, and just sits in the falling water. She is panting, with labored pain filled breath. The sister enters the bathroom, immediately see her sister, sensing her pain. So the sister simply climbs into the shower to wrap her arms around her younger sister. They both sit in the falling water.

Now the woman is dry and alone in bed, sleeping. The movie is closing, and her voice is heard saying, “Learn to breathe.” The screen switches back to the beautiful tree from the opening screen as her voice continues, “I may never feel good, but I can be well. And I can be happy.’ And the credits roll.

This movie resonated with me because I feel like I live in a constant “7,” except when I flare into a 10 or 15 or 20. “A Happy Seven” is beautifully scripted, filmed, and acted. It felt genuine to me. I felt like it was a day in the life of me. Relatability is a large part of targeting an audience, and this short-film did it well. These are the opinions of Juli Wordgirl, and are in no way affiliated with any group or persons. Once again, I encourage everyone, with any chronic pain disease or illness, to view this film in its entirety. Gauge for yourself and see what you think. Wordgirl uses and defines words of all sizes to create awareness of CRPS and related conditions. Word Up!”

This is the entire review post on the pain-group’s Facebook site. Embarrassingly, there were spelling errors found when I copied it into a Word document. Bad on Wordgirl! Oh well, even Wordgirl makes mistakes—that’s how CRPS works on the brain’s limbic system, right?

The point is: CRPS affects the whole person, not just the physical body. Recent scientific links have found that Fibro actually IS CRPS. For more information, please view Dr. Philip Getson’s YouTube.com video “A Different Approach Extended with Philip Getson, DO.” There are, of course, different opinions about the Fibro/CRPS link; but after thinking about the commonalities—how can they not be related [This is the opinion of Juli Wordgirl]?

Unfortunately, “A Happy Seven” is not currently available for general viewing. When it is released, I ardently urge everyone to watch its well-captured viewpoint of life with chronic pain. Word up!

Don’t Give Up on Me

Posted On November 7, 2019 ~ 0 Comments
Written by Shannon Schildt-Leidig for the RSDSA blog. Anyone who knows me knows what a huge lover of music I am – and that any…

Never Give Up On Yourself

Posted On November 6, 2019 ~ 0 Comments
Written by Julie Manni for the RSDSA blog. How and when did you develop CRPS/RSD? My journey with CRPS/RSD started in the fall of 2001…

Posted On November 21, 2018 ~ 0 Comments
By Shannon Schildt-Leidig Oh my gosh I cannot believe we are coming up to the Holiday season and the end of another year!  This is…