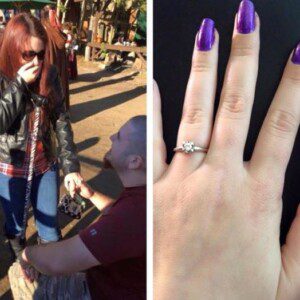 In 2015, I had one of my worst CRPS flare ups, thanks to a dislocation from EDS (Ehlers-Danlos Syndrome). It was scary to me because it was the one limb I had not experienced pain in. But, it happened and I was in a wheelchair. I fought my way out of the wheelchair and back to my zebra print cane after a few months. I was ultimately used to flare ups at this point, as I was nine years into my diagnosis with CRPS.

What did I do when I was able to move again? I went to a renaissance fair with my boyfriend and a group of friends. I had been looking forward to this fair for over a year, but I started the day off by forgetting my wallet at home… Spectacular, right? I blame pain brain. I knew I could not make it through a full day, between my pain and my mood, but I decided to make the most of it. And how can you not laugh when everyone you are with is in costume, which makes your boyfriend buy a kilt to have something to wear. But he kept running off with the males of the group while I went around the park with my friend. (Note: Looking back, I realize this was very uncharacteristic of him, especially in crowds where he likes to protect me from anyone that may bump into me). We met up for lunch and he brought me “Love On a Stick” that they sell at the fair (a purple rose). And then we went our separate ways again. The biggest event at the fair is the jousting tournament between the knights to try to win the princess over. That was the end goal for us. When it got to be an hour before the tournament, we all met up. We wanted to get a good place to view the event, so we headed over there early. My arm had been hurting from carrying my coat in the crook of my arm all day, so he took my coat. But then he took my water, my rose, my phone, and everything else from my hands and passed it off to our friends. I was quite embarrassed because I thought I was starting to look like a privileged princess myself. But then I was turned around to see him kneeling on the ground, and he was not tying his shoes.

After eight and a half years of dating, four years of college, three new diagnosis (for me), and already a lifetime of memories, my best friend proposed to me. You can even see my zebra print cane in all of the pictures that people took from the proposal. That face is pure shock. I had absolutely no idea. I think the number one reason I really did not expect it is because there were so many people around and Aaron (my fiancé) is extremely shy. We are middle school sweethearts that were set on each other from the start. Our friends have called us mom and dad since high school. Now that we are engaged, that means a wedding has to be planned! Do not worry everyone; I have only been planning my wedding for seven years. It should not be that hard… right? Okay, stop right there. I can hear you laughing through the computer!

I consider myself very lucky. I had been diagnosed only a few months before Aaron and I started dating. He was petrified by CRPS at first. But then he sat down and researched it with one of the members of his family so they would know what to expect. He went from being a boy with a blue mohawk to a man on a mission to help me along this ride that we call life. I was told by various people for a very long time that he would get tired of loving a disabled person and would leave before even considering marriage. It was discouraging to say the least. But I knew he was different than that. And he continues to prove to me every day that he is different. He has even started to educate people about CRPS on his own. You may even see some of his graphic designs at upcoming RSDSA events. All of this made me realize people can tell you your life will be a certain way, but that doesn’t mean it will be. I was told I’d never walk again when I was 13- I was able to walk again. I was told I’d never get through college- I graduated summa cum laude as a double major. I was told I’d never get married- that’s about to happen now. I realize now that your life is not to be dictated by others. You are so much more than your CRPS. You may have to try a few times and you may need to do things differently than some other people, but you can do virtually anything.

Let me entertain you for the next year and a half as I plan my wedding. You will get a firsthand account of all of my trials, triumphs, and stumbles along the way. I know that having CRPS will require me to think of some things that other brides do not have to consider. At this point, it is second nature for me though. From finding a wedding dress that does not hurt my skin, to finding a venue that has options other than stairs (and everything in between), you will get access to what is happening in my wedding planning life. Balancing CRPS, a job, and a wedding is not necessarily a cake walk, but I am going to make the most of it! (Oh, I forgot about the cake testing. Yum).

Our bridal party has been selected (a total of 16 about people). Right now, I am working on guest lists. Our guest list went from “Let’s keep it around 150” to “Mom just added more people, so we are at 220.” Oh boy. Wish me luck! Stay tuned for the next CRPS Wedding Chronicles story! 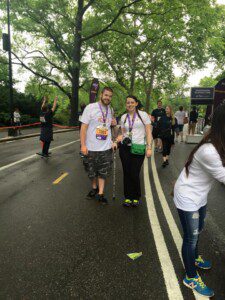 Aaron and I at the Achilles Finish Line in 2015

We’re Partnering With The Mighty!

Posted On July 12, 2016 ~ 0 Comments
CRPS/RSD, RSDSA, and The Mighty (Oh My). We are so excited to announce that we have a new found partnership with The Mighty. This partnership…

Posted On May 8, 2015 ~ 0 Comments
Written by Aubrey Haley for the RSDSA blog. In 2013, after living with full body CRPS for almost four years, I was afforded the opportunity…

Posted On August 30, 2016 ~ 0 Comments
Read this story of hope about Jodi, who lives with CRPS, from Ainsworth Institute of Pain Management. "Jodi, like most women, does it all. She…