Hope Has Found You 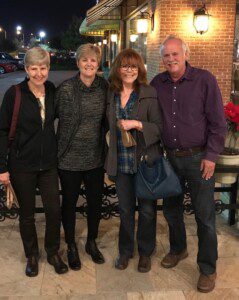 Suddenly living life with chronic pain syndromes, such as CRPS/RSD, can be a shock to the system. There are a number of trials and tribulations that people living with CRPS/RSD go through. Terri Arnett writes about her experience and how she now feels hopeful and encouraged.

I know why people take their lives due to mind-altering pain. The type of pain that shrouds your every move, your every thought, your very existence. A pain no narcotic can relieve. A level of pain that makes you think you will lose your mind. I know because this was me. This is my story.

For 10 years I wandered the land of Ooos and Aghs. It started innocently: my right hand and fingers gradually became so cold I required a space heater year-round by my office chair to warm my hand. Typing on the computer made them even colder. When I told my assistant my hand was cold in July, she grabbed it and joked, “It’s because you’re a weirdo.” I shrugged. I’d worked hard to become so.

As the months turned into years I grew steadily worse. Now the top of my right hand, my fingertips, the palm of my hand, and my wrist burned like they were on fire. This became my way of life. I consulted MDs, PhDs, and neurologists who ran a plethora of tests, all of which were negative. They prescribed Gabapentin, which did nothing. I had carpel tunnel surgery after a doctor said that was my problem. When I went back for my check up I told him I still had numbness, tingling, and burning. He responded, “I have no idea what that is.”

By 2013 I was much worse. Now my arm shook so bad it appeared as though I had Parkinson’s. I could not cut my food, my fingertips registered 65° and eating utensils were excruciating. My right hand was stark white when compared to the healthy pink of my left. Most days my pain level rocketed to a nine. At the end of a working day my arm/hand was so weak I could barely lift them off my lap, and I slumped over to the right. I had little strength or ability to lift my arm or to straighten up.

Left on my own I scoured the Internet, pouring through medical sites as though I were going to take the MCATS. Some symptoms were found individually but all symptoms were not found collectively. Desperation set in. I scheduled a consultation with a sports rehab doctor I had seen years before for my lower back.

After describing my symptoms, he asked me to hold my arms up in the “stick ’em up position.” Within seconds my right arm started to shake violently. He was matter of fact; “You have thoracic outlet syndrome.” I thought he was speaking in tongues. He explained this is a vascular issue – not a neurological one – thus it’s very difficult to diagnose. To correct the problem a vascular surgeon must remove the first rib located between your neck and collarbone. This is an area that looks like a “V” with the first rib on top and the collarbone underneath. In the middle are blood vessels. Somehow these become restricted and removing the first rib will allow the proper blood-flow. Because this is a big surgery there was only one doctor that he would trust to perform it: Dr. Gregory Pearl.

Two weeks later I was in Dr. Pearl’s office and within 30 seconds he confirmed the diagnosis. A month later I was in surgery not only to remove my first rib but also to release the right front pectoral muscle to stop the shaking.

I recovered well until October 2015, when some of the TOS symptoms returned. By April 2016 all symptoms had resurfaced. I consulted with Dr. Pearl who believed this was scar tissue, which an EMG confirmed. 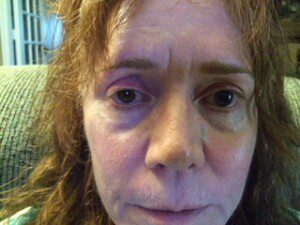 Terri Arnett, close up and personal, during a moment of pain

On June 28, 2016, surgery was performed to remove the scar tissue from the first rib and pectoral area, and the nerves were wrapped. It was the worst he had seen. Back in my hospital room it was as though joyful emoji’s danced around me: I feel great! This surgery worked! I feel nothing! Brand new woman here! But as the anesthesia wore off these thoughts were replaced by the news that I had received injections to numb me from the collarbone to my chest, down my arm to the tip of my fingers. I felt like the Pillsbury Dough Boy.

Dr. Pearl’s reputation is known world-wide. Yet no one could have predicted that after this surgery, I’d be pushed over the precipice into a year of hell.

July 4 I woke up to a drooped left eye and my right pupil completely dilated. This began my downward spiral into a 24-hour, pain level 10. My condition was far worse than before the surgery. I am right-hand dominant making things worse. New sensations assaulted my body.

September began four weeks of physical therapy. To get my range of motion back, I was to face the corner of two walls and flatten my hands lightly on them. I was not able to flatten my hands and my fingertips could not tolerate the slightest touch. My hand and thumb strength were zero. At the end of four weeks, my range of motion was good but the burning, numbness, funny bone sensations did not improve. When my right arm was extended out to my side, it shook once again like I had Parkinson’s.

October. I felt trapped in my body. How do you get away from yourself? How do you escape unrelenting pain? At the end of five months I took a sharp descent into agony. I would tell my husband don’t touch me, don’t talk to me—I can’t stand it. There were times the pain was so severe I would have panic attacks and stutter uncontrollably, thus I was prescribed Valium. I was short with people and felt I was a mere shadow of the person I used to be. My pain medication was escalated to the strongest narcotics available, but it had the effect of a placebo. When I took Morphine, it slurred my speech and I stumbled around like a modern-day Otis of Mayberry, and I stopped it. I could not see me living the rest of my life at this level of pain and in this debilitating condition.

In November, Dr. Pearl referred me to a pain management doctor, requesting he perform stellate ganglion blocks. These are injections done under anesthesia in the front of the throat to interrupt the pain signal. I would have rather strut like Mick Jagger down Main Street in my birthday suit. Over five months I had six injections with no improvement. In March, this doctor was no longer on my insurance plan.

In prayer I searched the Internet and found raving reviews for Dr. Kelly Will. He was fully aware of my condition, and it finally had a name: Reflex Sympathetic Dystrophy Syndrome. Because the injections had not worked, he suggested a seven-day trial of a spinal cord stimulator from Saint Jude’s Medical. This device short signals the sympathetic nervous system to the brain so it does not perceive the pain signals as pain. The goal is to achieve a 50% reduction in pain and if it has these results, I would make the decision to have a permanent implant. One June 29, 2017, I had the trial implant and the effect was immediate! I went from a pain level of ten to a two. My symptoms had diminished drastically. This was the miracle I had prayed and believed for. Two weeks later I had the permanent implant because as I told him, “I always said I was wired for sound.”

At two months from my implant date, my life is once again filled with laughter and smiles. The year I endured taught me many things. I had to will myself every day to get up and act as if it was a normal day. To put on my make up and get dressed even though it was excruciating to do so. I would make myself go on walks even though I had to hold my arm and somehow protect it from the slightest breeze and agonizing cold. Thru my earbuds I listened to encouraging messages and flooded my soul with gospel music. Yet the vast majority of those walks were spent in tears: some giving thanks that everything would be okay and others due to the unrelenting pain that ravaged my body. And the things I once felt were so important – vacuuming the house, dusting, keeping my home spotless – I found they didn’t matter as much as what I thought they did. I learned to let many things go and not to worry. And I never stopped praying.

I willed myself to keep going, sometimes minute by minute. There were times I would sink into such a deep depression I thought I would never climb out of it. Yet in that deep valley I was forced to look up and continued to believe God would bring a miracle. Occasionally, I reminded Him where I lived.

My miracle came in the form of a spinal cord stimulator through the skillful hands of Dr. Kelly Will and my St. Jude’s rep, Cher. My parents were astounded at my transformation. The pain lines that had once etched my face were now gone – something Dr. Pearl confirmed.

A spinal cord stimulator is life-changing technology, designed for people with forms of chronic pain. Go to St. Jude’s Medical at www.PowerOverYourPain.com for more information. Is it a “cure”? No. That’s like complaining a cow moos. But as for me, to live a life at a pain level two, it sure feels like one.

Understanding CRPS/RSD – As Taken from Fitness for Your Health

Posted On May 30, 2017 ~ 5 Comments
Written By Michael Sullivan, PT, MSPT for RSDSA blog. This post is about understanding CRPS was originally featured on "Fitness for Your Health." Learn about…

Posted On March 8, 2016 ~ 3 Comments
By Guest Blogger Anna Evenosky So often we find ourselves in situations where people are trying their best to help us when in reality they…