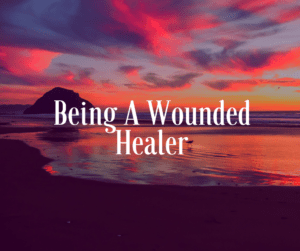 “You come out of suffering sometimes scarred. But you come out, anyway, a stronger person…you become, yourself, a wounded healer.” -Bobby Schuller

As a chronic pain warrior, have you ever thought of yourself as a healer? Not a physical healer, by no means! If that were the case, we would not be in the state we are in currently. No, I speak of being what Bobby Schuller termed a ‘wounded healer’.

What does that mean? A wounded healer is one who is or has gone through a time of suffering. Instead of being broken by it all, they come out stronger and are able to aid those on a similar path. Though unable to heal their fellow travelers physically, they can come alongside, empathetically encouraging them on their journey.

The first, The Good Samaritan (Luke 10: 25-37), a parable that Jesus told to his disciples. The story goes that a Jewish man was traveling from Jerusalem to Jericho when he was attacked by bandits who stripped him of his clothes, beat him, and left him die on the side of the road. By chance, a priest came by, saw the man lying there, crossed to the other side of the road, and continued on his merry way. Next, came a Levite, who also saw the man and, likewise, crossed to the other side of the road, going on about his busy day. Both too busy and unconcerned to help the dying man. Finally, a Samaritan came, saw the man, and took pity upon him. He dressed the man’s wounds and took him to the nearest inn, where he continued to care for the man. The next day, he gave the innkeeper two silver coins, telling him, “Take care of this man. If the bill runs higher than this, I’ll pay you the next time I’m here.”

What is the significance of this parable?

In ancient Israel, Samaritans were despised by the Jews because they were pagan, but more specifically because they were half-breeds, half-Jewish; half-Gentile. They were hated so much that the Jews would go out of their way not to step foot inside Samaria. This was the very reason Jesus used a Samaritan in this parable, because he would be the least likely to aid a Jew. But because the Samaritan knew what it was like to be tossed to the side and treated like dirt, he took pity on the beaten man and helped him.

The second example comes from one of my favorite movie trilogies of all time, The Lord Of Rings. In The Return of The King, as Frodo and Sam climb up the steep slopes of Mount Doom to destroy the One Ring wrapped around Frodo’s neck, Frodo finds himself too weak to carry on and loses hope. In typical Sam fashion, he rushes to Frodo’s side, and states, “Come on, Mr. Frodo! I can’t carry it for you…but I can carry you!” And so, Sam, with what strength he has left, lifts Frodo onto his back and slowly climbs up the mountain.

Sam may not have been able to bear the burden of the One Ring, but he could help get Frodo to his destination and destroy it. In this war, we need more wounded healers, those who have gone through the fire and can encourage those who come after.

Will you be one?

Posted On June 6, 2018 ~ 0 Comments
By Guest Blogger Caroline Bert We were lucky enough to meet Caroline at our Achilles Walk and then at our Long Island walk. As a…

But I Still Look Fine – Living with Chronic Pain/CRPS

Posted On May 10, 2016 ~ 0 Comments
By Guest Blogger Tara White, RN I used to be a very active woman. I proudly served as a corpsman in the United States Navy…

I Feel Your Pain: The Power of Witness in Support Group

Posted On December 4, 2015 ~ 0 Comments
By Elisa Friedlander, from her blog. People have a deeply innate desire to be seen. I'm not talking about Facebook selfie type visibility, I mean…