Nerve Pain Is Hard to Explain

Written by Heather Maerten for the RSDSA blog.

My name is Heather Maerten and I’m a mother of three and a pediatric nurse. 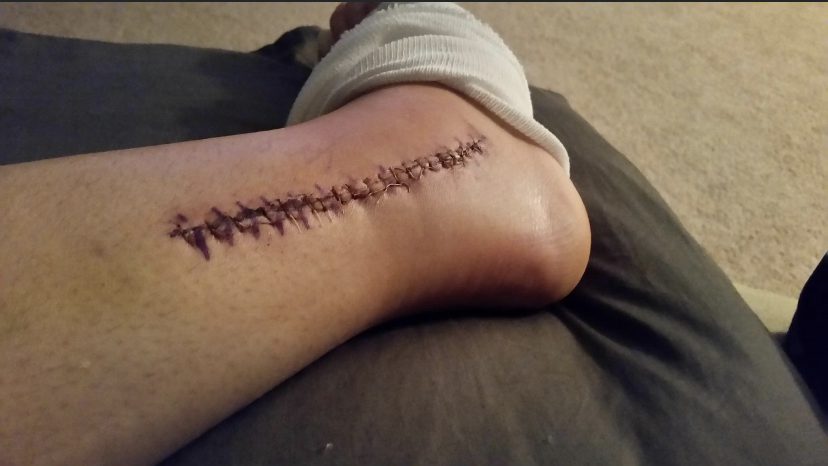 In August of 2015, I was working as a nurse in emergency transport for Children’s Hospital of Philadelphia. During a call, I rolled my ankle coming off the helicopter. I went to urgent care after my shift and was diagnosed with a sprain after the s-ray was misread (my talus bone in my ankle was actually fractured). From August to April, I saw multiple doctors and completed six weeks of physical therapy on a broken bone, unknowingly. In April, I met with a specialist and after multiple images it was determined my talus was broken, a ligament was shredded, and both tendons were torn. I had surgery in June which included a fibular groove deepening. During the surgery, my sural nerve (a sympathetic nerve) was accidentally cut through but the surgeon failed to inform me with the thoughts that it “would get better.”

That is the moment I developed RSD/CRPS, the moment my life changed forever.

The first few days post op were horrible.  I cried, took pain medicine, slept and cried some more. My foot and leg felt as if they were being strangled but the doctors did not seem to understand. I was told it was a painful surgery, given more pain meds and sent on my way multiple times. Weeks went by and the pain progressively got worse: pins and needles, burning sensation, color and temperature changes, and atrophy. I had no choice but to go back to work as I am a single mom. I had to take a light duty job for the first time inmy life and it was extremely disheartening.  As the months passed, the nerve damage spread up my leg. I went to numerous pain specialists and underwent multiple nerve blocks (spinal, epidural and sural) over the next year. I was literally exhausted from being in pain every day. The thought of having to wake up day after day in pain made me feel hopeless. My kids would ask me almost daily “are the doctors going to fix you yet?” I tried my best to cover up what I was dealing with but they knew. 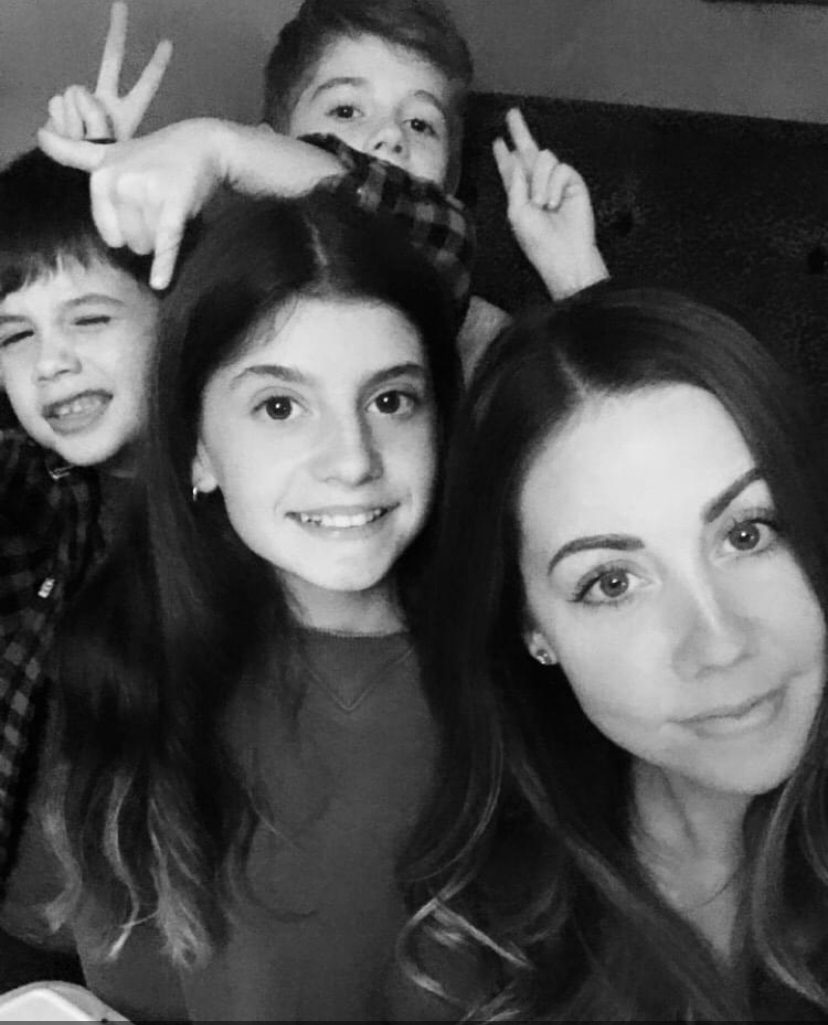 Heather and her three children

Nerve pain is hard to explain. It is like pins and needles times one thousand 24/7. It’s like coming inside after being out in the snow when you were little and experiencing that burning/re-warming feeling 24/7. It’s the feeling of having rubber bands cutting off circulation 24/7. It’s exhausting and it’s exhausting being exhausted 24/7.

There was a point in time I made the decision with myself that I wanted to have my leg amputated. In my mind I was willing to lose my leg to get rid of the pain. I even had a meeting with my doctor and brought my family and begged him to amputate but he would not. Apparently that would not help the nerve pain and only make it worse.

Do not give up! If one doctor does not listen or understand, go to a second. If thirteen doctors do not listen, go to the fourteenth. Do your own research and listen to your body!

After doing my own research I found an RSD specialist in my area. His name is Dr. Philip Getson. He was the first doctor to tell me I had RSD and basically inform me of my options. Unfortunately, I am in that 20% whose RSD spreads so my options were slim. 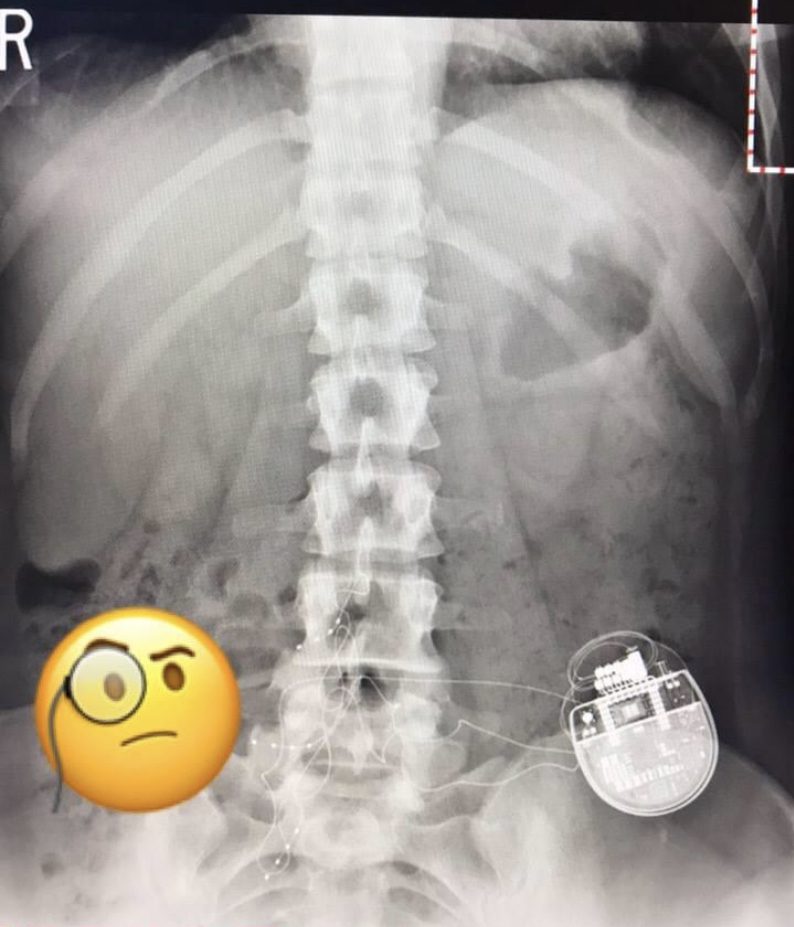 X-ray with Heather’s back stimulator

After many discussions with Dr. Getson, I chose to have a DRG spinal cord stimulator implanted. I was referred to Abbott and an amazing doctor, Dr. Sean Li.

After a successful trial, I had the stimulator implanted June 2017.  It has completely changed my life.  My nerves and pain are now controlled. Although I still have work to do with this leg, I feel great! Since the stimulator was implanted, I have gone back to working my 12 hour shifts as a nurse, I coached my sons baseball team, and I run around with the three kids sometimes forgetting I even have RSD. There are days that are worse than others but the good days far exceed the bad days now!

When I would go to doctor’s appointments and try to explain the pain and frustrations, I would often hear “well you look great, just keep doing what you are doing.” The biggest misconception one can have is thinking that just because someone looks great means they feel great. Just because I tried to hide my pain and actually get dressed and do my hair and throw a little mascara on does not mean I felt great. Just because I looked great does not mean my body was not screaming for help. 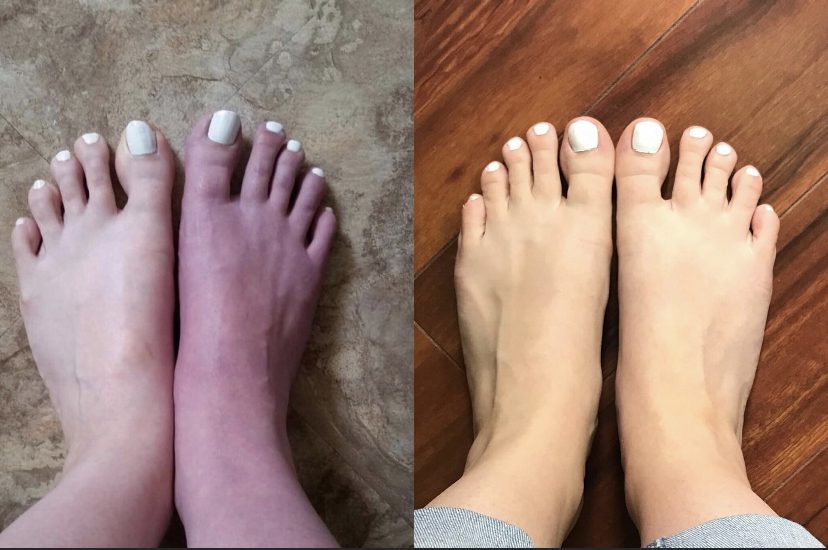 Side-by-side of foot before spinal cord stimulator and after

RSD continues to be studied and is becoming more recognized in the medical field. With more knowledge comes more treatments and the possibility of a cure.

I hope that each and every one of you warriors can find something that provides relief! Do not give up! You are a warrior for a reason!

Reach out to Heather on Instagram or via email.

Posted On August 1, 2018 ~ 0 Comments
James W. Broatch, RSDSA’s Executive Vice President, Director I want to introduce you to a special book which was recently published as a testimony to…

Posted On September 5, 2018 ~ 0 Comments
By Linda Young Like a purveyor of fine wine or food, I am a purveyor of a neurological disorder that has impeded my body but…

You Will Survive This Storm