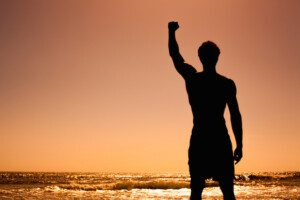 Guest blogger Gabe returns this week. After his blog entitled “A Thorn in the Flesh” was well-received, he returns to write about how CRPS pain can change you, but it doesn’t need to be in a negative way.

With chronic pain, it can be very easy to allow it to define who you are. You can feel like just giving up and allow it to control every inch of your life, letting it decide who you can be.

In all honesty, I have found myself doing the exact same thing. Because of how extensive and unpredictable our condition is, we find it extremely difficult to set and attain goals. Every time we set out with good intentions we find ourselves shortly thereafter in so much pain that we feel defeated before we even start. Things that usually help us cope with the pain, after a while, stop working. We are constantly having to adapt to this illness.  Sometimes, we just want to throw in the towel, saying, “What does it matter if I plan to do this now? I won’t be able to when the next surge of pain comes along.”

To put this in a matter of perspective, imagine you are a fort being defended by a small garrison of soldiers against a larger, menacing foe.  Your enemies have the ability to be invisible until they attack, making your job of defending even more difficult because you do not know from where the attack will come. To make things worse, your enemies are not mindless barbarians, but super-intelligent aliens, so they are very quick learners and will never attack the same way twice and never let up. Because of the relentless onslaught, your soldiers are constantly on the brink of total surrender.

Now, let’s change up a few things in this scenario. What if we replaced our extremely exhausted soldiers with adaptive, super robots that will constantly take the enemy’s attacks, and, with equal strength, push back, seeking new ways to combat and overcome the unrelenting forces.

Wishful thinking, right? What I am trying to say is that one of the key things we need to do is just like Tim Fargo stated, “…not let pain define you, let it refine you.” Some of the greatest people in history were refined through their pain, from Steven Hawking to Helen Keller. If they could overcome their struggles, can we not do the same?

You may not need an army of adaptive, super robots to help you fight your battle with chronic pain, but not allowing it to define you is a good first step toward victory. Choose not to be defined, defeated by this invisible enemy, but choose to be refined daily, facing it head on.

Palliative Care for the Person with Complex Pain Generating Syndromes

Posted On August 23, 2017 ~ 0 Comments
Written by Dr. Terri A. Lewis What is palliative care and what does it mean for people with complex pain syndromes? Dr. Lewis sheds light…

Posted On June 6, 2018 ~ 0 Comments
By Guest Blogger Caroline Bert We were lucky enough to meet Caroline at our Achilles Walk and then at our Long Island walk. As a…

Posted On January 12, 2016 ~ 0 Comments
Written by Melissa Lovitz, Guest Blogger for RSDSA Dear Body, I’m sorry for wishing you were different and calling you flawed. Living with chronic pain…