Swimming Against the Current 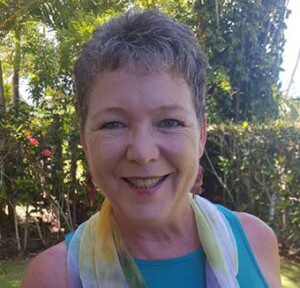 November is National Complex Regional Pain Syndrome Awareness Month, and November 17, 2018 holds special significance for Konnie Parke. On the 7th anniversary of the surgery that led to her CRPS, she intends to celebrate in an unusual way – she will televise a swim-a-thon in her garage to raise awareness about this rare disease.

Her goal is to swim for seven hours over a 24-hour period – in 15 to 30-minute increments – while live streaming the event. “Doing a fundraiser feels intimidating,” she says, “but it’s a passionate project of the heart. I can’t walk, I can’t run, I can’t Zumba, but I can swim. It’s my way of giving back.” In fact, swimming has become an integral part of her pain management strategy, which includes medications, acupressure, biofeedback, and participating in a choir. Interspersed between swim sessions, her family will talk about how CRPS has affected them, and Konnie will share alternative therapies that have helped her adapt. She hopes to include a taped interview with her pain doctor, and will post a video about her experience on a fundraising website.

Having CRPS affected everyone in Konnie’s family, and they hope that sharing their story will help others by validating their experience and offering tips on finding ways to cope with the life altering dynamics of living with CPRS.

Konnie developed CRPS after knee surgery. She was back to work as a Registered Nurse (RN) within 24 hours, but three days later she couldn’t finish her shift. Her leg was blue and mottled. The pain was so intense that she could barely drive home and had to pull over. As an RN, she knew the icy pain and blue color signaled lack of blood flow. “It looked dead,” she says.

When she visited her surgeon, he told her she had RSD but offered no advice. “You’re a nurse,” he said. “Look it up.” Then he walked out of the room. Her primary care physician’s only advice was to “Get used to a new normal.” “I was furious with this advice,” says Konnie. “I liked my life just as it was.” Over time she came to understand how important this advice was, she was going to have to be the driver of her own treatment plan.

She began to research treatment options, sorting through information gleaned from the internet and RSDSA newsletters. She started working with desensitization, but even the light touch of a feather caused extreme pain. She was referred to a pain management clinic where she tried many different medications, painful spinal injections, a spinal cord stimulator, and physical therapy. When these failed, her doctor told her that opiate therapy was her last resort.

Within a year of her diagnosis, she had to give up her job and her career. For the next 18 months she was restricted to bed, relied on a cane for walking, and developed full-body spasms that resembled seizures. She needed progressively higher doses of medications and felt like a walking zombie. Like many people taking opioids to manage chronic pain, she endured monthly doctor visits, urine tests, judgmental pharmacists, and insensitive comments by family and friends.

“I had a full life,” she says, “but CRPS changed everything. My husband and I had our retirement all planned out. I carried the life and health insurance policies through my employer. We were out of debt, and I deposited my checks into retirement accounts in the hope of filling missions for our church after retirement. Developing CRPS was like a boot full of water suddenly tipped upside down. We had to change our whole life plan.”

Over her lifetime, Konnie had overcome several injuries and health challenges, but developing CRPS in her left leg was a game-changer. It was hard for her family, co-workers and neighbors to understand why she wasn’t getting better. She remembers being “silly grandma,” the one who would romp on the floor on hands and knees, giggling with her grandchildren. But now they were cautioned by their concerned parents to stay away. Even a slight bump sent her pain through the roof. She was relegated to sitting with her leg elevated and wrapped in heat blankets. To help the grandchildren understand, she euphemistically referring to her legs as the “happy leg” and the “sad leg.” This was one of many adaptations needed to find a new normal while living with chronic pain.

Frustrated by the side effects of opioid therapy, Konnie continued to research alternative treatments. She discovered a video of Dr. Pradeep Chopra at an RSDSA patient conference discussing the pathophysiology of the inflammatory response. As an RN, she was interested to learn that glial cells in the Central Nervous System release cytokines, which travel to the site of an injury to create inflammation, a normal process to heal damaged tissue. In CRPS, however, the inflammatory response doesn’t shut down and glial cells remain activated. Dr. Chopra explained that in the short term, opioids reduce pain by blocking glial cell receptors, slowing the release of inflammatory cytokines. In the long term, however, opioid therapy can misfire, as glial cells develop the capacity to grow more receptors that release even more cytokines, setting up a self-perpetuating cycle of inflammation. According to Dr. Chopra, low dose naltrexone (LDN), which cannot be used in combination with opioid therapy, deactivates glial cells[1]. It was a therapy Konnie was determined to try.

At the same time she was exploring biofeedback, a method of learning to control body processes, and Tapping, a practice that merges Eastern acupressure with Western affirmation. During flares, she would practice these techniques, which encouraged her to lovingly accept herself, to acknowledge her feelings, and to visualize her body cancelling the pain. “But I felt like I couldn’t have a conversation with my brain while I was taking opiates.”

For many months Konnie brought research about LDN therapy to her doctor, but he refused to consider this alternative therapy. Finally in March 2016, facing another dosage increase, she took a drastic measure. Against doctor’s advice, she decided to wean off opiates to show her doctor how serious she was about trying LDN.

“I tried to get a weaning schedule from my doctor, but calls weren’t returned,” says Konnie. “Using my medical knowledge, I took the next six weeks to wean from two types of opioids.” Then, with research in hand, she went back to her doctor, told him she was off opioids and asked him to reconsider LDN as an option. “He made me wait another four weeks to prove I was opiate free, but he finally gave me a prescription for LDN based on Dr. Chopra’s dosing schedule.”

Stopping opioid therapy wasn’t easy. “The physical withdrawal was really bad,” she says, “even though I had a physical dependence on opiates, I had no psychological addiction.” Working with biofeedback and Tapping, she learned to tamp down the anxiety that comes with unpredictable severe pain; letting go of thoughts like “I can’t live like this” and “what if it never goes away?” With practice, she has had success reducing pain. Her flares last days now, not months or years. She still has “damn it days,” when she takes to bed with a heating pad, but she feels like she has more options to deal with it, and that gives her hope.

Today Konnie relies on a combination of medications, pool therapy, audio books, Tapping, and biofeedback. She no longer needs a cane, and dedicates the first two hours of the day to her swim-spa. “Depending on how rough a night it’s been, sometimes I’m toast after that.” She also enjoys participating in a choir, which distracts her from the pain by engaging her mind.

Although her insurance covered an expensive surgery to implant a spinal cord stimulator, she had to save for two years until she could afford the indoor swim-spa, which has become her daily therapy. She swims against a current of water, modifying her strokes to compensate for the CRPS in her left leg, and the damage to her right hip from extra load bearing. The buoyancy of the water allows her to move in ways she couldn’t outside the water. “I use an aqua-jogger belt to keep afloat, and foam barbells. I have developed ways to do step aerobics, dance, hula and Tai chi.”

When she began, she could only be in the water for two minutes at a time, but has built up to being in the pool for several hours. Some days she blasts Led Zeppelin while exercising, and other days she just lets the bubbles pour over her body. “The 92 degree water helps my blood flow, because the capillaries in my leg shut down in water below 90 degrees. It also helps manage my spasms,” she said. “It’s my happy place, where I feel I have the most control over my body.”

By sharing her story, Konnie hopes to inspire other people coping with CRPS. She also wants to encourage doctors, physical therapists, and insurers to consider (and pay for) alternate therapies. “It’s about the bigger picture,” she says, “above and beyond my own little story. If someone can glean something useful from my story, that’s mission accomplished.”

She will donate contributions from her First Giving page to RSDSA, which has been a source of information and hope during her journey.

Jenny Picciotto is a writer and CRPS patient who enjoys reading and playing the piano. She was a yoga instructor and massage therapist before CRPS changed her trajectory. She currently lives in Hawaii, where she facilitates the Oahu CRPS Support Group.

Posted On October 2, 2019 ~ 0 Comments
We always appreciate when Warriors of all ages take a moment to share their CRPS story with us. During the 4th Annual RSDSA Long Island…

What Happens When the Strong Get Tired?