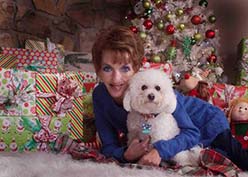 Oh my gosh I cannot believe we are coming up to the Holiday season and the end of another year!  This is a time in which I stop and reflect on all that has happened in the past year and to say THANKS to those special people in my life who have stood by me thru thick and thin ~ and believe me there have been some very thin and dark times this year . . . . .

This blog is dedicated to two very special people in my life, my parents John and Mary Ann Schildt who have been my support since I was diagnosed with RSD/CRPS 28 years ago.  I honestly do not know what I could have done without them ~ two of the most amazingly strong and dedicated parents ever.

If someone would have told us the nature of this 28-year journey with RSD, I would not have believed them.  However, that is exactly what we have been on a journey, a journey to many doctors over the years, the journey of various treatments, medications and surgeries all in an unsuccessful attempt to tame this RSD beast.  This journey has not been mine alone but has also affected and impacted the lives of those who love me, especially my parents.  I have watched them both struggle each and every day trying to remain strong for me, their daughter, while I say “I got this, I can handle RSD!” While at night I lie in bed sobbing like a child asking God, “Why? How in the heck do I beat this?”  I cannot show my parents, family and friends that I am struggling.  So each morning I get up and put my fake mask on to show that I am handling this!  Meanwhile my parents are doing the same thing as they do not want to show me just how much RSD has sucker punched their lives too!

As the years have gone by, I have always been able to eke my way thru it ~ thankful for my faith in God and prayer as well as with the support from my family.  However, little did know how much we would be tried and tested as we battle this beast as December 15, 2017 began the day my life with RSD turned into a nightmare of living hell.  We, as a family as well as my doctors decided it was time to explant my pain pump.  While this may have been the right decision it was the worst thing I could have done as an RSD patient as we all know surgery is the torch that lights the wildfire of this RSD beast!

I can honestly say that this past year has been HELL!  There are NO other words I can find to express it ~ I have been to the doctor more times this past year than I can count – I seriously thought I should move a bed in to their office. My doctors struggled to figure the best course of treatment to tame the ferocious RSD animal.  There were treatments and medications, too numerous to count.  Days upon endless days of being down on the couch or in bed because I could not move due to the excruciating intense severe pain of RSD.  Tears shed in the shower because even the water hitting my back and legs caused so much pain, I wanted to spit dirt.  Crying buckets of tears as I knew in the shower my sobs would be hidden by the sound of the fan running.  Too many things I wanted to do yet there was NO way I could ~ my head may have said yes but my body said NO!

Yet all during this time stood two of the strongest people I know, my Mom and Dad.  Even though they were struggling with their own hell as they watched their daughter battling this beast, they could not tame.  So many times, my parents would say, what can I do to help?  My reply, nothing ~ how does that make a daughter feel?  How does that make a parent feel as our parents are supposed to make everything better.  However, with RSD nothing can tame the beast as it rages on its brutality in our bodies day in and day out.  RSD does not care if it is your birthday, if it is Easter or Christmas ~ it rages on as the volcano of hot liquid lava pain rages thru our bodies.  My heart hurts knowing my parents want to help yet there was nothing they can do.  There were days when they thought I could not hear their cries, their heartache, their tears ~ yet I did and that hurt me knowing they were going thru their own RSD Hell.

We are coming up to a year when we went down that slippery slope of surgery ~ and are things better?  I will say jury is still out on that one ~ BUT I will say that I have the best parents in the world ~ they are my rock of Gibraltar, my best friends, my heroes and I am truly thankful and blessed knowing that no matter what my parents have stood by me thru the best of times and the worst of times.  In this season of thanksgiving, I just want to say Thank You to my parents, John and Mary Ann Schildt for being the best parents and friends a daughter could ever ask for ~ I am truly proud to be your daughter!  I love you both! 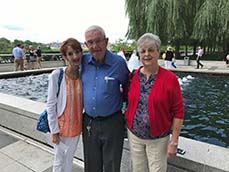 A Profile in Courage

The late President John F. Kennedy wrote a book, Profiles in Courage.  There are many individuals who have and can bear that title of a Profile in Courage.  One is our daughter Shannon.  She was a freshman in college majoring in music therapy at Shenandoah University in Winchester.  Life was good.  Then on February 12, 1990 her life, and the lives of our family were forever changed.

Shannon called saying her hand and wrist were hurting.  She was diagnosed with carpal tunnel and subsequent surgery. The doctor said there was more than carpal tunnel.  The pain became worse after surgery as it spread to her other arm and then her two legs.  For a brief time she was unable to walk.  Shannon was tested for Lyme’s disease, lupus, juvenile arthritis and many other conditions.  She was finally diagnosed in April 1990 with Reflex Sympathetic Dystrophy which now goes by the name Complex Regional Pain Syndrome.  Thus began an almost 29-year battle and continuing journey with pain that is like a flaming fire that does not go away.

There were the trips to hospitals in Baltimore, Philadelphia, Cleveland, Georgetown, many more.  For us there were long drives, hours spent in waiting rooms as well as the continued financial costs of treatments, medications and doctor bills as well as surgeries.

But above and beyond the travel, waiting and expense.  There has been the internal pain of watching a daughter suffer, struggling to work, seeing a decrease in her social life because of the ramifications of pain.  We as her parents can do virtually nothing except support her.  We have not walked in Shannon’s shoes nor felt her pain, but as with all parents we have had and continue to experience the pain of seeing our beloved daughter suffer.  She battles on saying, “I am more than my disease.” In our eyes she is a profile in courage.

But the One Thing You Cannot Ever Do Is Quit

Posted On October 6, 2021 ~ 0 Comments
Written by Belinda Conarty for the RSDSA blog. How and when did you develop CRPS/RSD? I had surgery on my ankle in July 2000 and the…

“A Happy Seven” Short Film Review – Relating Back to CRPS

Posted On July 25, 2017 ~ 2 Comments
Written by Guest Blogger Juli Wordgirl Chronic Pain Blogger, Juli Wordgirl, offers her insight into the short film entitled "A Happy Seven." How does she…

You Will Be Stronger in the End!

Posted On November 20, 2019 ~ 0 Comments
Written by Rachel W. for the RSDSA blog. How and when did you develop CRPS/RSD? In September 2018, I was at tumbling practice and I…