Back to Stories of Hope 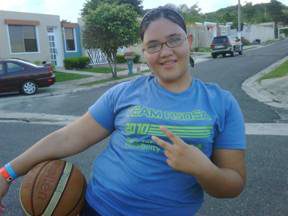 Yazmin Michelle from Puerto Rico hopes to teach others about CRPS, which has profoundly affected both her and her family. Yazmin has had CRPS for 8 years. Her sister-in-law is also afflicted and recently, Yazmin’s 13-year old daughter, Estefany, has been diagnosed with CRPS.

After 3 months and countless MRIs, x-rays, and CT scans, doctors suspected Estefany also had CRPS, but they were still uncertain. In addition to her uncontrolled pain, Estefany was also becoming more despondent. “I could see her pain and frustration. She couldn’t go to school, she couldn’t play sports, and she couldn’t go outside. She was having a lot of emotional stress.” At that point, Yazmin knew she needed to take control of Estefany’s treatment. “I started doing research on the Internet and found RSDSA. I was learning more in order to help my daughter. I couldn’t leave this on the hands of the doctors. They couldn’t do this on their own—they needed a lot of help learning about the disease,” she states. Yazmin hopes that increased awareness within the medical community will help doctors more quickly and correctly diagnose CRPS.

As a result of her research, Yamzin found the Children’s Hospital in Boston. In December 2009, they diagnosed Estefany’s condition, and 2 months later she entered the hospital’s Pediatric Pain Rehabilitation Center. Estefany participated in a rigorous, and at times painful, physical therapy program. Showing significant improvement, she left her crutches behind in Boston and happily upgraded to a bicycle upon her return to Puerto Rico.

Now, this mother and daughter duo are actively promoting CRPS awareness in their community. In addition to several newspaper and radio interviews, Estefany has been featured in 2 local TV programs. The 2010 Achillies Walk for Hope & Possibility also provided an opportunity for Yazmin to inform others about the condition she and her daughter suffer. Yazmin was an active fundraiser for the Achilles Walk by participating as a virtual walker. For the second year, the RSDSA encouraged virtual walkers—participants who are unable to physically be in Central Park but are motivated by common goals of raising awareness and funding research.

Yazmin understands how CRPS and chronic pain can negatively impact not only those with CRPS but also their loved ones. “This condition affects everyone emotionally. It affects your family,” she says. Yazmin has been actively promoting awareness of CRPS in Puerto Rico by sharing her experience, as well as her family’s, with others struggling with this condition. “I feel so proud, because through Estefany, we have been helping others get involved.”

Yazmin’s encouragement and assistance has helped 2 others from Puerto Rico create a CRPS support group Grupo de Apoyo Puerto Rico RSD/CRPS, and Yazmin also has her own support group, Puerto Rico Challenge RSD/CRPS & All Chronic Pain (http://www.facebook.com/group.php?gid=147478188596347). She hopes to increase the influence of all support groups related to pain by helping them unite in their common cause. “I would like to motivate others all over the world to spread hope about pain management. As a team and working together, we can all be painless,” she states.

In addition to the support this family team has been giving others, Estefany has experienced a shift in her own mental battle with the disease. “Estefany is better—so much better. She feels like this never happened. It is an example of what hope means. You cannot give up,” concludes Yazmin.

Back to Stories of Hope